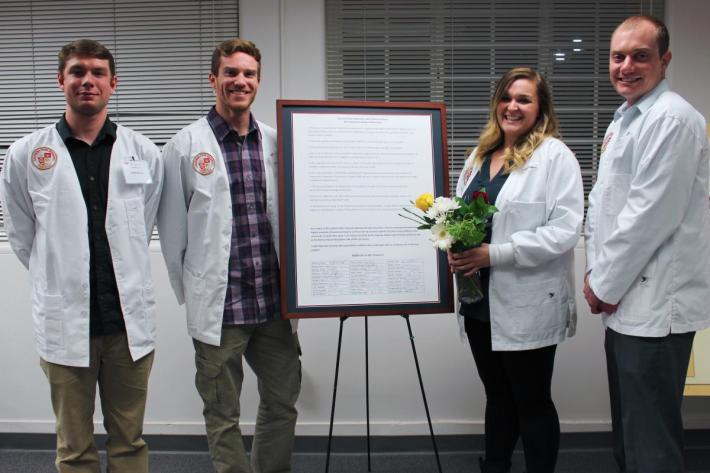 On February 20, 2016 the Stanislaus State School of Nursing (SON) proudly held its first White Coat Ceremony at the Stockton Center for the Accelerated Second Bachelor of Science in Nursing (ASBSN) program.  The ceremony welcomed the Class of 2017 to professional nursing.  The attendance of more than 130 individuals included Stan State leadership, faculty, community partnership leadership, friends and family members of the ASBSN Class of 2017.

History of the White Coat Ceremony

The White Coat ceremony began as a rite of passage in medical schools more than 20 years ago.  In nursing, the White Coat Ceremony is symbolic of the 100 year old traditional “capping ceremony” that remained in place until the early 1980’s when nurses no longer wore nursing caps.  Today, through collaboration between the Arnold P. Gold Foundation and the American Association of Colleges of Nursing, White Coat Ceremonies were promoted nationally in 2014.  The ceremony celebrates a significant milestone in the lives of first-year nursing students.  The goal is to promote humanistic, patient-centered care among all health professionals.

The ceremony began with the Stan State Dean(s) Mark Grobner, Helene Caudill, Faimous Harrison and SON Director Debbie Tavernier providing words of welcome and support to the Class of 2017.  St. Joseph’s Medical Center nursing leader, Nathaniel Watkins spoke on the importance of nursing mentorship and career development.  Each student walked across stage and was cloaked by SON Director Debbie Tavernier and ASBSN Director Janelle Culjis.  Lastly, students signed the Code of Ethics for Nursing, accepting the commitment and obligations of the nursing profession.  Students were given a copy of the Code of Ethics for Nursing with a red pin, from the Arnold P. Gold Foundation, which reads “Humanism and Excellence”.

This ceremony confirms the community’s support of the educational process that prepares future professional nurses for practice.  The most important element of the ceremony is the oath that students take and celebrate in front of their family members, friends, faculty and staff.