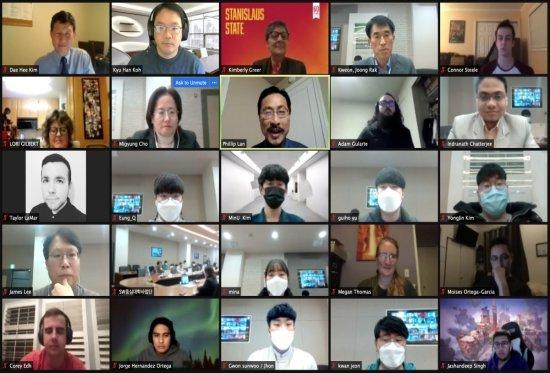 While most Stanislaus State students were happy to take a break from remote learning in January, 11 computer science students dug in for more.

They overcame the time difference, with Stan State students beginning their class at 4:30 p.m. when it was 9:30 a.m. in Korea, the next day, and put in five hours a day in class learning coding and web development.

Originally planned for last summer on the Stan State campus, the intensive four-week camp went virtual in the wake of COVID-19 and took place last month. The intended connection between the students occurred, but in a different format.

Students from both universities were placed in teams and they worked together on a joint project throughout the camp.

The course, coordinated by Stan State’s Office of Extended and International Education, was funded by a South Korean government grant to educate its college students across different disciplines in coding. The University’s partnership in the enterprise was the result of Stan State Computer Science Professor Dae Hee (Danny) Kim’s ties to his homeland.

Kim, in his third year at Stan State, and Tongmyong University Professor Migyung Cho were undergraduate students together at Pusan National University in Busan, South Korea. When Cho sought an American public university where her students could study coding, she connected with Kim.

She loved the beauty of the campus, Koh said, and he and Kim went to work creating a course for her Korean students. It was evident by last summer an in-person class would not be possible due to the pandemic, and they began looking at a virtual format.

“Unfortunately, we don’t have an official web development course yet,” Koh said. “Eventually we will, but Bay Valley Tech has a web development boot camp. We contacted them and asked them to redesign their curriculum to fit into our four-week boot camp. That was challenging, because their class is designed for six weeks, and we had to fit everything into four weeks.”

They met with the Korean students and their instructors for 30 minutes after each session, allowing students to ask questions and have them answered in their native language.

“We wanted to encourage the Korean students to stay in the camp,” Kim said. “Several students voiced concern about collaborating with American students because of their English.”

Apparently, they needn’t have worried.

“If the Korean students didn’t understand us, we repeated ourselves and honestly, their English is amazing,” said Stan State student Edh. “Sometimes I forgot that English is their second language. My team member Adam Gularte knows some Korean, which helped.”

Gularte, bored with home confinement during the pandemic, began learning Korean. It may have helped him, Edh and their two Korean teammates earn the top award for their month-long project and end-of-session presentation, although Gularte credits the extra work each team member put into the project outside of their class time together.

“I got a lot out of the camp,” said Gularte, a senior. “Coming in as someone already quite deep into my computer science degree program, I had a good amount of coding experience but almost no experience with the web development side that the camp was covering. The instructors from Bay Valley Tech were exceedingly helpful and got us into the complexities of web development.”

Bay Valley Tech’s connections to the computer industry often lead to paid internships for its graduates. Beyond that possibility, Gularte enjoyed the international experience.

“Working in a team, with foreign students, was a fantastic experience,” Gularte said. “I especially liked that for the duration of the camp we were kept with the same group, and by the end I would say we were truly becoming good friends.”

The bonds between students were visible, Kim said, and excite him about future collaborations with Tongmyong.

Koh has sought ways to collaborate with Korean universities since he arrived at Stan State five years ago. He implemented a general education course, mainly targeting students in liberal studies, to teach computing concepts and foster future teachers at K-12 levels, which is already done in Korea. Although this joint course had a different mission, Koh was thrilled with the benefits it afforded Stan State students.

“I witnessed how international collaboration can be beneficial to our own students, because it’s what they’ll experience in a real job in this industry,” Koh said. “They will face people they’ve never seen before and work with people from the other side of the world. In the tech field, we all come from different parts of the world. It was really good practice for our students.”