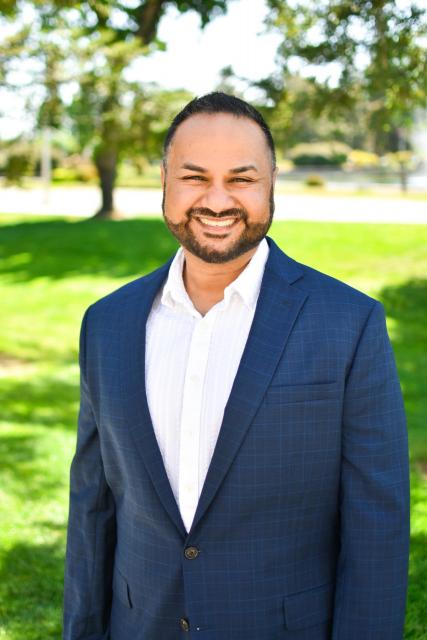 Umar Ghuman, associate professor of public administration, can still see the look on the face of a man he was asked to meet with about how to fund an afterschool program in an underserved area of Turlock.

“That meeting underscored for me that he was not going to get the kind of funding he needed because he didn’t have the infrastructure in place.”

The conversation led Ghuman to develop Stanislaus State’s online Graduate Certificate in Nonprofit Management, the first such graduate-level program in the state partly funded by the California State University Commission on Extended Education.

It enrolled its first cohort of five students this fall with some from the Bay Area and Sacramento. They will complete four graduate-level courses, one at a time, during the 2021-22 academic year to earn the certificate. Should they later choose to pursue a Master of Public Administration (MPA), the four courses will be credited as electives in the program.

What they’ll gain with the certificate is a broader understanding of establishing and running a nonprofit, including key skills such as how to write and manage grant proposals, how to work with volunteers and leadership and management in the nonprofit sector.

The four courses in the certificate program — Introduction to Nonprofit Management, Grant Writing and Administration, Strategic Development of Nonprofits and Organization Development and Group Dynamics — originated in the MPA program. Ghuman created them as electives to serve a growing number of students interested in working in the nonprofit sector.

Making that information available to non-MPA students was next.

From there, the College of Business Administration had to sign-off on a “management” label, because it offers its own management degree program, though not in nonprofits. Next, approval had to come from the Department of Political Science, Public Administration and Leadership Studies, the College of the Arts, Humanities and Social Sciences, the Graduate Council, the Academic Senate, the provost and the California State University.

While that process took time, it wasn’t as challenging for Ghuman as the pandemic.

“I was planning to go to nonprofit organizations, speak to their staff members all around the Central Valley, introduce myself, our program and how it had been created to specifically address their needs,” Ghuman said. “I wasn’t able to do any of it. I have an MBA with a background in sales and marketing, and I love all that stuff, but I wasn’t able to do it or to utilize the immense contacts I have in the nonprofit sector. So, we developed a social media campaign and reached out to potentially interested applicants through Facebook, Instagram and our website.”

Ghuman serves as a board member for the United Way of Stanislaus County and has previously served on the board of the We Care Program in Turlock, which addresses homelessness.

Seven or eight years ago, a student in one of his classes asked Ghuman to help re-write the mission statement for the United Way of Stanislaus County. In working with the organization, he realized, “there really aren’t a lot of educational materials and developmental opportunities for people interested in nonprofit management and leadership.”

He began, with the support of his department, to develop elective courses, the first being Introduction to Nonprofit Management. Grant writing and administration followed and then, while continuing to consult for local nonprofits, he developed more courses.

“Some themes that consistently came up with the nonprofit directors and leaders of the nonprofit community were that they would, for themselves and their staff, like more training and more opportunities for education and developing strategic capabilities,” Ghuman said. “Like most nonprofits, their focus was on putting out fires all the time. A lot of them were concerned about succession planning. They were afraid when they retired there wouldn’t be the right sort of leader to take their place.”

Training nonprofit leaders of the future is the goal with the nonprofit management certificate.

Ghuman has enlisted local talent to teach the courses.

A former MPA student Norma Cardona who has written grant proposals that netted more than $7 million for Merced County schools, will teach Grant Writing and Administration.

Michele Lahti, Stan State’s vice president for the Division of University Advancement, who has an extensive background in nonprofit leadership, will co-teach Strategic Development for Nonprofits with Ghuman.

He will teach Organizational Development and Group Dynamics. Being the last course of the program, it will allow him to make sure all planned concepts were introduced.

“The nonprofit sector has grown,” Ghuman said. “It’s become much more professional. There’s a language now to this professionalism. If you don’t speak the language, you’re not going to be able to get in the door. We want to be able to give students that language, that knowledge.”